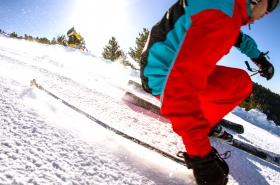 According to research by consultancy to the European Travel Commission Bulgaria is in the top 6 of the most popular European destinations for winter tourism. That said Tourism Minister Nikolina Angelkova a meeting of the Committee on Economic Policy and Tourism of the National Assembly. The discussion was attended by representatives of the Ministry of Foreign Affairs, the Committee on Consumer Protection and branch tourist associations and others.

"We had meetings at places in our three major ski resorts - Bansko, Pamporovo and Borovets, which showed that business and control authorities are ready for the new season," said Nikolina Angelkova. According to her, according to the reports submitted by last season reduces distortions of business, which shows that we are making increasing efforts to offer quality tourism product.

The Minister informed that ski resorts have expressed readiness to meet the requirements of the new Regulation on information security and safeguarding of the ski runs and ski areas and the organization of work of the ski patrol. During the discussion it became clear that revenues from last year's winter season are nearly one billion lev, and over 1.2 million. Tourists visited our country. "I hope the future winter season is more successful," said Nikolina Angelkova.

Representatives of winter resorts have stated that there is strong interest, as so far only in Borovets is a growth of nearly 20% of the UK market. Nikolina Angelkova stressed that work towards strengthening the promotion and presence on the international tourist market. Prepare and strategic partnerships with some of the biggest tour operators and low cost airlines.

Back
Back to top
Share
Copyright. All rights reserved. Web Design By SW